How To Calculate Stock Options And Awards

Many clients especially in the Seattle, and Bellevue area, have forms of stock options. These may include stock options, Restricted Stock Units (RSUs) (which Amazon uses), stock awards, and ESPP’s. Valuing these in a divorce is a little bit tricky.

There are several different parts of an option or an award to consider. Typically when you get a stock award, all the stocks will best over a period of time: frequently for years.

Example: take Alexander Murry. He is the imaginary client that we’re using in our sample divorce. When he signed up with his company he got a signing bonus of 2000 shares of stock. But to get all 2000 shares of stock he had to work there for the next four years. 500 shares of those “vested” every year: that is, every year he got the right to cash in 500 shares if he was still employed by the company at that time.

If, by the time Alexander gets divorced, he has been employed for two years, the prior two years of stock awards have already vested and been paid by the company. At his one and two year anniversary, the company gave him 500 shares of stock at the current market price and moved them into his account at Fidelity.

But now he is getting divorced. In two years time he may not be working for his company. He would argue, and it seems fair, that because all future income from future employment is separate property, the stocks he gets in the future should be his separate property. And thus his wife Catherine should get nothing.

Catherine obviously thinks otherwise. She argues that the reason he has those shares, is because he was employed when he was married to her. And thus she has a community interest in those shares. And in a case called Marriage of Short, the Court of Appeals, Division 1, agreed with Catherine.

The concept is pretty simple. There is a community interest in the percentage of the shares of stock options, or future unvested awards, that is equal to the percentage of time that they were together during the entire vesting period.

It gets a bit complicated because there are frequently multiple awards. Alexander for example got a signing award, plus awards at his annual reviews every year.

So I have put together a simple award calculation which is below. This post explains how the calculation works.

First you have to know the date of marriage and the date of separation. The Murrys were married in June 2003, and separated in May 2016. Alexander began getting shares of stock in 2010, when he began to work for MZN. All of those have long since vested and were cashed out and used to buy Tesseract equipment. (Now sitting in his garage.) So we won’t consider those.

Then every year on his review, he got awarded a certain number of shares. For example: in 2011 under Award Number 1298, he got 325 shares. He vested in all of those, and has cashed them out. There are no unvested shares from that award.

Moving forward to 2012, under award 8719 he was awarded 410 shares. Most of those have vested. 152 of them are still unvested, and will vest in August 2016. (This is done as of date of separation.) That final tranche was the result of four years of employment. He was married and together with Catherine for 45 months out of the 48 months’ total. The community therefore has a 45/48ths (or 93%) share of the total options. Thus in August 2016 when all 152 shares finally vest, 141 of them will be community.

To figure the community value all you have to do is multiply the 141 shares times the market price of the shares. MZN’s price as of the day of calculation is $57.34 per share. The community equity in those unvested shares is $8,105.50.

If this is an actual stock option, you have to go through the additional step of subtracting the strike price, or the price at which the company gave you the option, from the market value.

Now, to some degree this is imaginary money. The shares have not yet vested, and it is possible that price will change by then, or Alexander will get fired and not actually best in them. But the court will still divide them and award Catherine a share of the community equity.

What most people do in reality is either agree to divide the net proceeds from the shares when they finally vest in some ratio. Most of the time we see a 50-50 split. That way both sides take some of the risk. Sometimes, however, some somebody will have an emotional attachment to their Apple shares, and not want to give them up. Then they will use something else – maybe the house equity, maybe a bigger share of the 401(k) – to offset the community equity in the future awards. 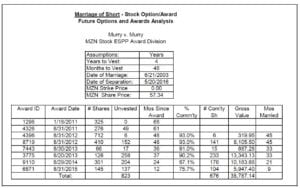